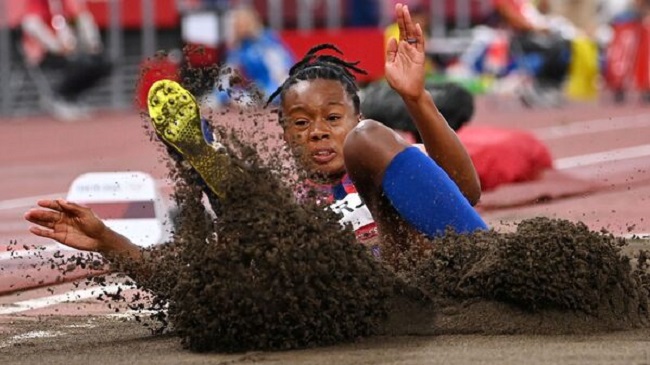 Keturah Orji is an American track and field athlete who was born on March 5, 1996. She competes primarily in the triple jump.

He grew up in Mount Olive Township, New Jersey, and graduated from Mount Olive High School in 2014.

Orji competed at Giant Gymnastics, Inc. in Hackettstown, New Jersey, as a level 8 gymnast in 2010.

She competed in the All-Around event at the 2010 New Jersey state championships (Vault, Bars, Beam and Floor).

As a kid, Orji’s dream was to compete in the Olympics as a gymnast. Orji attributes some of her early success to the gymnastics training she received as a child.

She was named the 2013–14 girls track and field Gatorade Player of the Year by the New Jersey State Interscholastic Athletic Association.

She defended her New Jersey Meet of Champions Triple Jump title and set a New Jersey state record with a leap of 42 feet, 6 inches.

Orji Ready To Deliver The KO

Keturah Orji has a knack for setting records at the Olympics. When he was just 19, the eight-time NCAA champion jumped 14.53 metres.

Shattering the previous US triple jump record by 12 inches; five years later, he improved that record to 14.71 metres, setting it at the Rio Olympics.

For the United States, her fourth-place finish (she was only three centimetres away from a medal) was a record.

Now, with the US Olympic Team Trials beginning this Friday (18), the Atlanta Track Club runner is concentrating on qualifying for her second Olympics.

Where she has a good chance of once again making history.

Keturah Orji, a graduate of the University of Georgia, came in seventh place in the women’s triple jump final on Sunday morning.

On Sunday morning at the 2020 Tokyo Olympics, women from all over the world competed in the final of the triple jump for a chance at a medal.

A final score of 14.59 was achieved by the world-class athlete. With a total score of 15.67, Yulimar Rojas of Venezuela set a new world record and took first place.

The triple jumper from New Jersey went to the University of Georgia and majored in finance.

In the 2015 NCAA Division I Indoor Track and Field Championships, Orji finished in second place in the triple jump and in thirteenth place in the long jump.

She won the 2015 NCAA Division I Outdoor Track and Field Championships in the triple jump, setting a new American junior record.