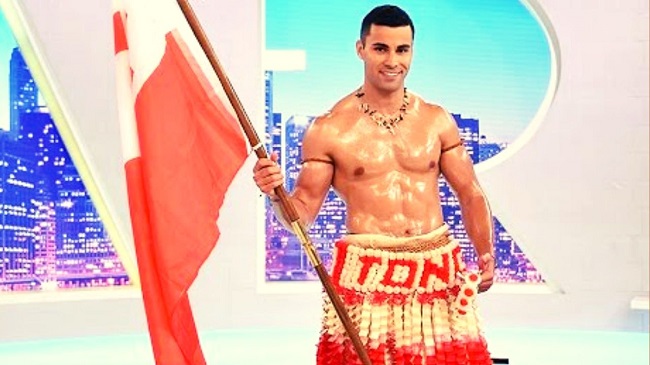 In 2016, Pita Taufatofua, better known as the “Shirtless Tongan,” carried his country’s flag.

Into Maracan stadium in Rio de Janeiro during the opening ceremony of the 2016 Summer Games, and the internet went wild.

The 37-year-old is participating in the Olympics once again, this time in Tokyo, where he led Tonga in the Parade of Nations on Friday.

However, he faced unexpected competition when Vanuatu’s flag bearer, rower Rillio Rii, walked out shirtless and oiled up like him.

A total of three Olympians represent the tiny South Pacific nation, and Rii is one of them. Now he’s off to compete in the Men’s Single Sculls.

For the 2018 Winter Olympics in Pyeongchang, Taufatofua did not wear a shirt. He expressed surprise at the time at the attention paid to his shirtless photos.

Tonga’s Shirtless Flag bearer is Back! But This Time he Wasn’t the Only One Who was Shirtless

Recent years have seen Tonga’s Olympic flag bearer become known for his shirtless, oily glory, but he had some competition this year.

After going viral at the 2016 Rio Olympics Opening Ceremony and again at the frigid 2018 Winter Olympics.

Shirtless and oiled-up Pita Taufatofua was back at the postponed Tokyo Olympics Opening Ceremony on Friday.

At previous Opening Ceremonies, he drew worldwide attention as he led his country’s athletes in the parade.

Taufatofua took part in the 15-kilometer and freestyle Cross-Country Skiing events at the 2018 Winter Olympics in PyeongChang.

He competed in the heavyweight Taekwondo event at the 2016 Olympics in Rio and finished in a tie for 11th place.

Also, he’s put his celebrity status to good use. Taufatofua is a UNICEF ambassador, helps out at homeless shelters, and collects money for underdeveloped countries to use to buy sports equipment.

At the opening ceremony of the Tokyo Olympics, Tonga was represented by flag bearer Pita Taufatofua, who, once again, did not wear a shirt.

Five years after capturing the world’s imagination by putting his body on display at the opening of the 2016 Olympics, Taufatofua showed off his well-oiled and well-toned chest and stomach.

Vanuatu’s lone Olympian in rowing, Rillio Rii, followed in Taufatofua’s footsteps by slathering on oil and flashing his chiselled chest as he carried the country’s flag.