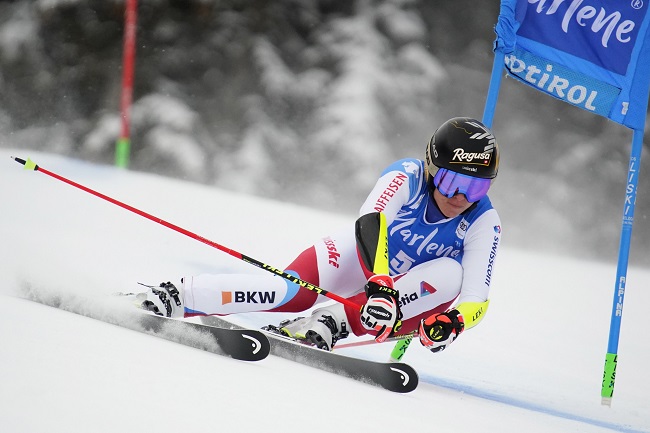 Bear in mind that there are two distinct categories of alpine skiing events at Beijing 2022: technical and speed.

Although most skiers specialise in one of two disciplines, “all-rounders” take part in all six events. They will be the ones looking exhausted when the Games conclude on February 20.

Downhill and the comic book sounding super-G are speed events; giant slalom and slalom are technical events; combined is a combination of the two.

All events are open to both sexes, and the mixed team parallel slalom made its debut at the 2018 PyeongChang Winter Olympics to much acclaim.

Giant Slalom vs. Super G Downhill: What Sets Them Apart

Like the Slalom, the Giant Slalom involves a sprint down the mountain through a series of tight gates spaced at various locations down the ski line.

Since this is a longer course that calls for a careful balance of speed and technical skill to pull off tight bends between the gates, the gates are spaced 10 metres further apart than they are in the Slalom event.

Each event requires two runs, and the combined time is used to determine the winner.

Super Giant Slalom, or “Super G,” is a speed event in which skiers take one run apiece. The vertical drop is greater and the course is longer than what is used in the Giant Slalom.

Despite the increased speed, athletes still have to make their way through a set of gates on the way downhill, however the gates are spaced widely apart than in the Giant Slalom.

Skiing is and always has been a popular activity for those who live in close proximity to snowy mountains.

Before it was formally recognised as a sport, it served as a mode of transportation. Few people get to experience the exhilaration of feeling the wind in their hair while skiing down a mountain.

As an added bonus, the weather and the clear blue sky lift the spirits. There’s a good reason why skiing has exploded in popularity.

Alpine skiing and freestyle skiing are the two most popular sub-disciplines within the larger sport of skiing.

The popularity of freestyle skiing can be attributed in large part to the fact that it is more competitive than traditional skiing and features elements of both speed and tricks.

However, alpine skiing is a sport to keep an eye on during the Olympics. Quickness and skill are essential.

However, the equipment used and the length of the course are also crucial factors in the outcome of the competition.

The fastest competition, where the only objective is to reach the base as quickly as possible while staying within the course’s boundaries on a single run.

Skiing downhill is all about speed, whereas slalom is all about technique. Throughout the course, competitors will encounter multiple changes of direction.

And will have to expertly navigate through tightly placed gates. If you fail to make it through any of the checkpoints, you will be disqualified. Thanks for reading our article Difference Between Super G Downhill and Giant Slalom.