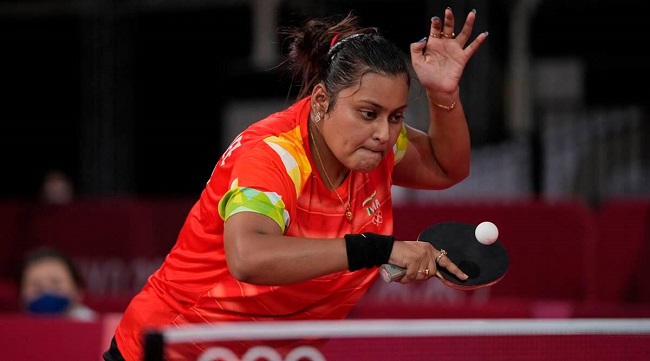 Sutirtha Mukherjee’s meteoric rise through the ranks of Indian table tennis is all the more remarkable given.

That she originally took up the sport as a means to lose weight during her school years.

When Sutirtha Mukherjee defeated India’s No. 1 player, Manika Batra, in the Asian qualifying tournament for the 2020 Olympics in Tokyo, she achieved a personal best.

After falling behind 2-0, Sutirtha Mukherjee rallied to defeat Linda Bergstrom of Sweden, a higher-ranked opponent, 4-3 in Mukherjee’s Olympic debut.

After losing to Portuguese veteran Fu Yu, 4-0, in the second round, Sutirtha Mukherjee was eliminated from competition.

Despite this, she finally got to compete in the Olympics, a lifelong goal of hers, and she made a remarkable comeback from a crushing ban a few years earlier.

Sutirtha Mukherjee, who was born on October 10, 1995 in the small town of Naihati in the Indian state of West Bengal, was banned from competing for two years in 2015 due to allegations of age fraud.

While the ban was devastating to the Indian table tennis player, Sutirtha Mukherjee kept working hard outside of the sport to get ready for her comeback.

Indian hopes in women’s singles were dashed when Manika Batra lost to Sofia Polcanova in the third round in straight games, and Sutirtha Mukherjee was eliminated by seasoned veteran Fu Yu.

After losing to Austria’s Sofia Polcanova in the third round of women’s singles play on Monday, Manika Batra’s Olympic campaign came to an end.

Manika Batra and Sharath Kamal were also eliminated from the mixed doubles competition.

She had defeated Tin-Tin Ho for her first Olympic singles victory and then proceeded to shock second-seeded Margaryta Pesotska.

However, the giant-killer was ultimately defeated by the 10th-seeded Sofia Polcanova.

On Monday, Sutirtha Mukherjee was eliminated from the women’s singles competition at the Tokyo Olympics after failing to stage a second consecutive comeback victory.

Yu maintained near-total dominance for the vast majority of the match, and Sutirtha never scored more than five points in any game. Yu won the match with a final score of 11-3, 11-3, 11-5, 11-5.

Sutirtha entered the match after pulling off a stunning 4-3 victory over Linda Bergstrom of Sweden, who was ranked 78th, on Saturday. Thanks for reading our article Sutirtha Mukherjee Olympic Games Tokyo 2020.