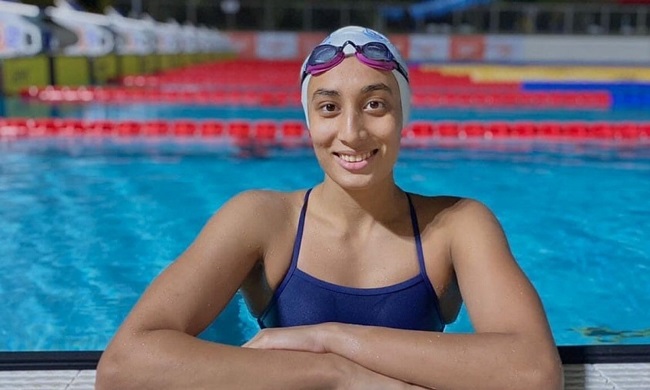 M.P. Patel is a backstroke swimmer from Ahmedabad, Gujarat, India. She was born on March 18, 2000. A lifelong swimmer, M.P. Patel took up the sport at the age of seven.

M.P. Patel is the first Indian woman to qualify for the Olympics, and she will be swimming the 100-meter backstroke for women in Tokyo.

Due to an ankle injury, the 21-year-old swimmer didn’t return to competition until this year. At the 40th Junior National Aquatics Championship in Hyderabad, she swam the 200-meter backstroke in 2 minutes and 23.41 seconds.

Which was faster than the previous national record held by Shikha Tandon (2 minutes, 26.41 seconds, set at the 2009 Asian Age Group Championship in Tokyo). At the National Games, M.P. Patel has also won gold in the 50-meter and 200-meter backstroke events.

Sunday in Tokyo, Indian swimmer M.P. Patel placed second in her heat in the women’s 100-meter backstroke, although she did not advance to the medal round. M.P. Patel, a first-time Olympian from Kenya, placed second, 1:05.20 to 1:02.73, to Donata Katai, a Zimbabwean.

Kimberly Ince of Grenada clocked in at a respectable 1 minute, 10.24 seconds to get third in the slowest heat 1. The Indian athlete, who was only 21 at the time of the games, made it in through a “Universality quota.”

Although he ultimately placed 39th. Eighteen of the best swimmers will advance to the semi-finals.

A recent article stated that the number of people that watched the Tokyo Olympics was the lowest it has been in the last 30 years. Obviously not the actual people that would normally be present in the stadiums to watch the games because of the outbreak.

However, that is a relatively small percentage of the world’s television audience, and there’s where the lack of interest is most apparent. A third of the audience has left since 2016.

Keep in mind that the world’s population has increased by 50% since the 1988 Games in Seoul, but that viewership has decreased. This is despite the fact that there are many more streaming platforms and viewing possibilities available now than there were before.

The investigation into this phenomenon’s cause promises to be fascinating. Even though the Olympics originated in Greece over 2,000 years ago, that tradition died out long ago.

A departure from the ancient Greek games, the modern Olympic Games were first held in 1896. Citius, Altius, Fortius (meaning “faster, higher, stronger”) is the Olympic motto, and it is not Greek but Latin.

The inclusion of women in the Olympic Games is something that would have shocked the ancient Greeks, but it has been standard practise at our games since 1900.