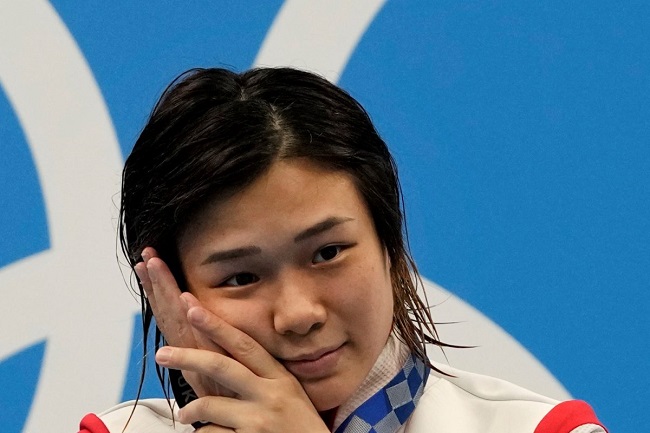 For the first five diving competitions, China has taken home four of the victories. At the men’s 10-meter platform synchro competition, they placed second.

Shi successfully defended her medals from Rio de Janeiro five years ago on both the 3-meter springboard and the springboard synchro with Wang Han.

Overall, Shi scored 383.50 more than his competitors across the five rounds. Wang placed second with a score of 348.75.

She slashed her way through the water, making hardly a ripple. Shi got out of the pool and wiped her tears away by burying her face in her yellow chamois.

American Krysta Palmer came in third with a total of 343.75 points. Since Kelly McCormick earned bronze at the 1988 Olympics in Seoul, she is the first American to win a medal in the 3-meter event.

Also, the United States hasn’t had an individual medal winner since Laura Wilkinson won gold on the platform at the 2000 Sydney Olympics.

In the men’s 3-meter synchronised springboard diving competition at the Tokyo Olympics, the identical first- and second-place finishes from the aforementioned divers have been achieved.

Xie Siyi of China scored a perfect 558.75 points to win the men’s 3m springboard, edging out Wang Zongyuan of the same country, with whom he had won the 3m synchro springboard earlier in the competition.

In the women’s competition, Shi Tingmao and her partner Wang Han won the 3m synchro gold and placed first and second, respectively.

After the preliminary rounds and the semi-finals, the top two slots were occupied by Chinese divers, and this trend continued in the finals.

Upon seeing the scores on his final dive, a series of 9.0s and 9.5s that earned him 558.75 points and the gold, Xie burst into tears. Wang approached his fellow player for a warm embrace.

The battle for silver was the most tense, but in the end, Wang had a perfect final dive to beat off Jack Laugher of Britain, who had 534.90.

When it came down to the final round, Laugher was only 2.05 points behind Wang, but he over-rotated his entrance and settled for bronze with a score of 518.00.

Currently, Shi Tingmao competes for the Chongqing diving squad out of China. The 2010s have been her decade of dominance on the 3-meter springboard.

Two of her gold medals were from the 2016 Olympics, while the other two will come from the 2020 Olympics. And eight of those World Championship gold medals are hers as well.