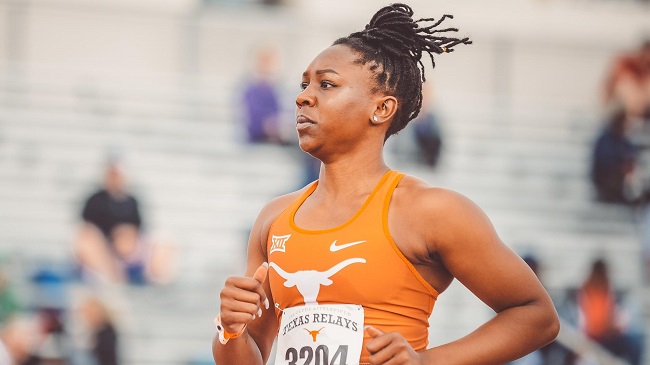 Teahna Daniels is a sprinter from the United States who was born on March 25, 1997. She competed for the United States in the women’s 100-meter dash at the 2019 World Athletics Championships and finished seventh overall.

She was the anchor of the American 4 100 m relay team that won gold at both the 2014 World Junior Championships.

In Athletics and the 2015 Pan American Junior Athletics Championships, where she also took bronze in the 100 m.

She was a finalist in the 100 and 200 metre events at the 2019 and 2017 NCAA Outdoor Championships, respectively, while competing for the Texas Longhorns collegiate track and field team.

In July of this year, she took first place in the 100-meter dash at the 2019 NACAC U18 and U23 Athletics Championships.

Teahna Daniels, a graduate of The First Academy, ran a leg for the United States women’s 4×100-meter relay team that finished in second place at the Tokyo 2020 Olympics.

Daniels made history by becoming the first TFA alum to win an Olympic medal. Daniels, along with colleagues Gabby Thomas, Jenna Prandini, and Aleia Hobbs, made it to the winners’ podium.

The U.S. women’s team qualified in second place, ahead of Great Britain and narrowly behind gold-medal winner Jamaica.

In June, Daniels earned a berth to the Olympics for the first time after qualifying to run in the 100-meter and 4×100-meter relays in Tokyo. In the 100-meter dash, she came in at number seven.

It was strange to see Asher-smith run down so late in the race, but she did not appear particularly frightened as the American pulled alongside.

Still, her timing of 11.07 was good enough to advance her to the semifinals. On Saturday, both the semi-final and final will be held.

After running a startling personal best of 10.63 in the 100-meter dash earlier in the year, Shelly-Ann Fraser-Pryce arrived in Tokyo as the favourite to win gold.

The 34-year-old woman started strong and cruised to a 10.84-second victory in her heat. As a member of Team GB, Daryll Neita finished second in Heat 4 behind world no. 3 Marie-Josee Ta Lou.

Ta Lou ran incredibly fast, setting a new African record with a timing of 10.78, and Neita ran a personal best of 10.96.

With her second-place finish behind Blessing Okagbare, Asha Philip made it a successful day for the British sprinting team.

US sprinter Teahna Daniels. She entered the world on 25 March 1997, in Orlando, Florida, USA. In the 100-meter dash, Team USA is represented by Teahna.

Teahna’s interest in sports dates back to her time in high school. She won the 60-meter dash at the 2015 New Balance Indoor Nationals and the 100-meter dash in the 2015 FHSAA State Championships.