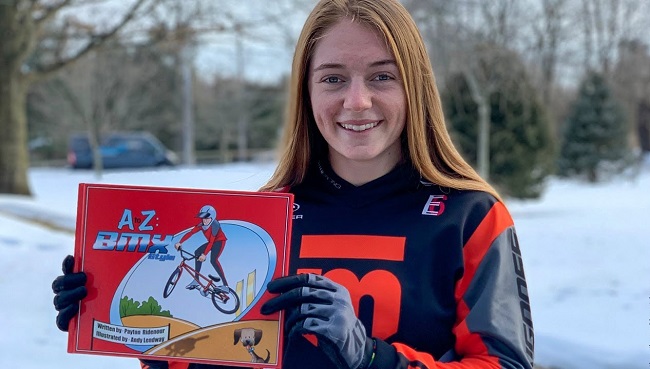 In the United States, Payton Ridenour is known as a BMX rider. She was born on May 29, 2002. She has won seven national titles in BMX and will be competing in the Olympics in 2020. S

he finished 17th in her event, despite being the youngest participant. At the BMX Supercross World Cup in Bogotá, Colombia, in May 2021, she placed second.

When it comes to offspring, Ridenour is alone. Keith, her father, raced BMX bikes at the amateur level. Ridenour is the author of a children’s book.

The thrilling sport of BMX racing will be featured at the 2020 Summer Olympics in Tokyo. Competing cyclists pedal around courses designed with ramps, dips, and other hazards.

U.S. Olympian Payton Ridenour, who will be 19 at the time, will take off from the steep starting ramp in 2020.

The Pottstown rider qualified for these games by placing second at the UCI World Cup, which took place in Colombia last year.

Ridenour, the youngest member of the United States women’s Olympic team, recently got down to discuss the complexities and hurdles she endured on her way to Tokyo.

One of the best amateur riders in the United States, Ridenour has won seven USA BMX national titles.

She is a champion rider in many disciplines and the 2019 UCI Red Bull Pump Track World Champion. Furthermore, Ridenour finished 2019 as the world’s fourth-best junior elite woman.

Pottstown, Pennsylvania native and 19-year-old BMX rider Payton “P-Nut” Ridenour. She was five when she and her dad first got into BMX riding, and ever since then she’s been hooked on BMX racing.

She was the National #1 Amateur Girl in 2018 and won seven N.A.G. titles during her amateur career.

She triumphed at the 2019 UCI Red Bull Pump Track World Championship in Bern, Switzerland, and was awarded the coveted rainbow stripes.

She has been selected to compete for the United States in the 2021 Tokyo Olympics. With her Olympic qualification hopes on the line.

Payton competed in the UCI World Cup in Bogota, Colombia, and finished an incredible second place, beating out some of the best cyclists in the world. You’ve done us all proud, P-Nut!