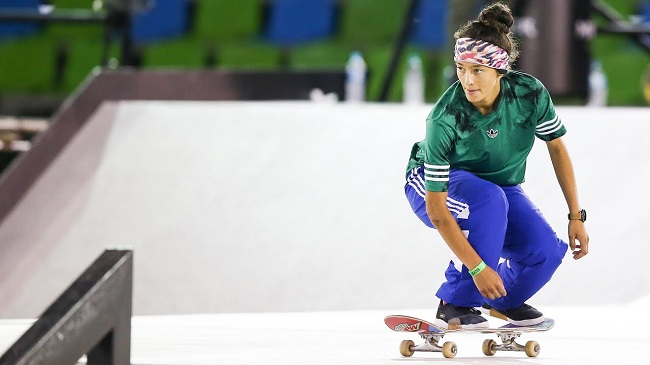 The top-ranked female street skateboarder in the United States got down with Tokyo 2020 to discuss the upcoming debut of her sport at the Olympic Games.

Family, taking chances, her native state of New Mexico, and the lightning-fast pace of the Olympics were among the themes covered.

M. Duran acquired her first skateboard when she was ten years old, but she was only allowed to visit the local skatepark if she was accompanied by either of her brothers, Elijah or Zeke.

She had already discovered how much she enjoyed trying new feats on the paved-over front yard of her parents’ house, despite the fact that the inevitable failure was part of the fun.

Albuquerque is a skating backwater, isolated by the high desert of central New Mexico and distant from the fashionable skate epicentres of southern California. “It all comes down to when you first climb on a skateboard,” she remarked of those formative early moments.

At that point, you can tell if you’re really a skater or not. Eventually, you’ll slam. That slam is going to hurt. And you’re going to get up whether I tell you to or not. Maybe you’re not cut out for skating if you don’t.

M. Duran Said She Had Tried Other Sports

Skating was different from the other sports she had attempted because you can learn on your own without a mentor or instructor. You can learn from your peers and from your own mistakes instead.

They would “simply go to the skate parks and if we wanted to learn something, attempt to figure it out,” she explained. And if you still need help, find someone who can. That’s right; you played the role of your own coach.

M. Duran mimicked her brother in every way, picking up new abilities and asking the same kinds of questions he had. It was a challenging process, and at times it was really aggravating.

“That’s a love/hate relationship,” she admitted. You care deeply about it, but you know it’s difficult. M. Duran ‘s brothers and friends could only teach her so much until it was time for her to figure out skateboarding on her own.

After a year’s delay due to the COVID-19 pandemic, the Tokyo Games have cast a new light on Olympic athletes as they continue to discuss their struggles with mental health.

Simone Biles, a gymnast who withdrew from many competitions owing to mental health issues and “the twisties,” wrote openly on social media about the difficulties she had been feeling.

When preparing for the Olympic Games this summer, M. Duran knew it was crucial to have a positive mental attitude.