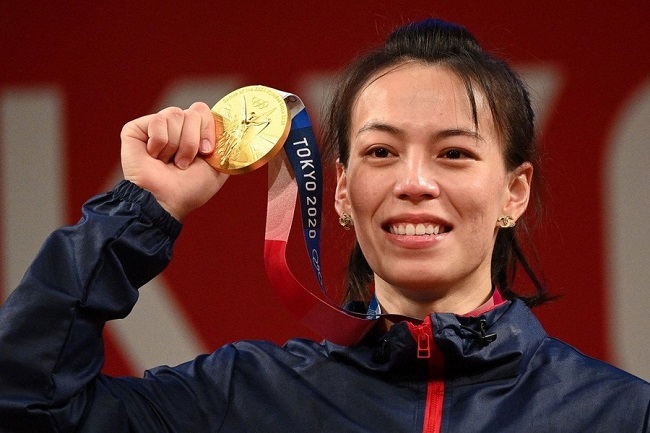 He competed in the 58 kg division up until 2018, but will now compete in the 59 kg division after the International Weightlifting Federation reorganised the categories. Eleven of her senior-level world records still stand.

Yilan is the place where in 1993 the world met H.C. Kuo . She was raised primarily by her grandmother because her mother was always working and she never met her biological father. H.C. Kuo given name, sounds like the Mandarin word for “to have survived by luck or accident,” alluding to the precarious conditions in which she was born.

Umbilical cord tangled around H.C. Kuo neck when she was born. Not only that, but her mother spent more than ten hours in labour. The family was constantly on the move, staying with various extended family members.

At the age of 13, H.C. Kuo started weightlifting and went on to compete in basketball, track, and field, and soccer. In high school, she focused on weightlifting.

The “Goddess of Weightlifting” has brought Taiwan its first Olympic gold medal. In the women’s 59-kilogram weightlifting competition on Tuesday, H.C. Kuo was unstoppable. Setting new Olympic records in both the snatch (103 kilogrammes) and the clean and jerk (133 kilogrammes) (236kg).

When H.C. Kuo, then 27 years old, made his first attempts at the snatch and clean and jerk, he lifted more weight than any other competitor had lifted in three tries combined.

She had the luxury of trying to clean and jerk 141 kilogrammes to break her own world record of 140 kilogrammes. But she collapsed to the ground after failing to achieve a successful final repetition.

H.C. Kuo has gone above and beyond in embodying the Olympic spirit, which has already been demonstrated by the Tokyo 2020 Olympic Games through numerous moving moments. Anonymously, the Chinese Taipei weightlifter gave over 1.8 million NTD (£46,900/$64,500/€55,000) to the regional hospital.

H.C. Kuo has also served as the flagbearer for her country at the Parade of Nations, and she has used her prominence to make significant positive changes in the world.

On Tuesday, weightlifter H.C. Kuo of Taiwan brought home gold from the Tokyo 2020 Olympics. That’s what happened in her life. Four times World Champion, two times Universiade Champion, one time Asian Games Champion, and four times Asian Champion, H.C. Kuo hails from Taiwan and has won all of these titles.

She can now put “Olympic Gold Medalist” next to her name on her list of accomplishments. H.C. Kuo won the first gold medal for Taiwan at the Tokyo 2020 Olympics on Tuesday, defeating all other women in her 59 kg weight class. Thanks for reading our article H.C. Kuo Olympic Games Tokyo 2020.