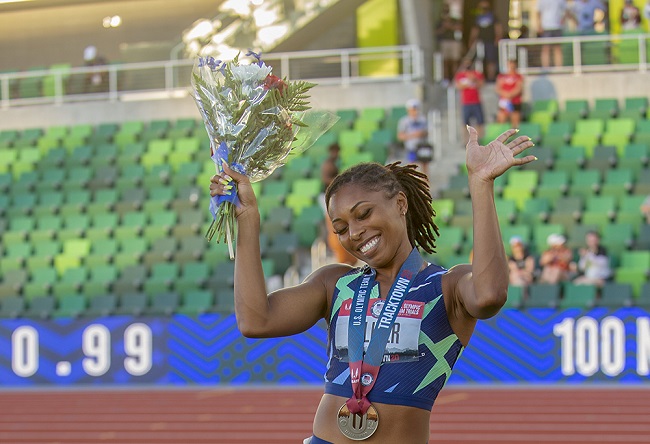 American sprinter J. Oliver was born on December 26, 1994. U of K’s J. Oliver placed second in the 60-meter dash at the 2017 NCAA Division I Indoor Track and Field Championships.

In that season, her time of 7.02 seconds was the fastest in the globe. She qualified for her second World Championships by placing second.

At the 2020 USA Track & Field Indoor Championships, behind only Mikiah Brisco. Additionally, J. Oliver won the US Olympic Trials in 2020 with a timing of 10.99.

J. Oliver On Return to Kentucky After Medaling at Tokyo Olympics

J. Oliver, who won a silver medal at the Olympics, is returning home to Kentucky. J. Oliver is looking forward to returning to her alma mater on October 2 for a recognition ceremony after her outstanding performance at the Tokyo 2020 Summer Games.

While in Tokyo for the 2020 Olympics, J. Oliver ran in both the 100-meter dash and the 4×100-meter relay, the latter of which she finished in second place in and won a silver medal for.

When asked during a press conference on Wednesday about her time at the 2020 games, J. Oliver mentioned how the stadium was deserted. And nd how the lack of spectators made for a very different ambiance compared to previous Olympic competitions.

She added that the athletes are “accustomed to it” today, despite the changes brought on by the protocols. Despite the absence of spectators and cheering, she “knew she had a medal” when she crossed the finish line.

J. Oliver claimed that she “didn’t even feel like I had been to the Olympics” until she got back. Monroe, Georgia, her hometown, greeted the new Olympic champion with a spectacular party upon her return.

J. Oliver was just as eager to tell others about her out-of-the-ordinary experience at this year’s Olympics as she had been before. Reuniting with her admirers after winning a medal was one of the highlights of her homecoming.

It’s a big medal, and it’s incredibly hefty! J. Oliver joked about how she was so keen to let people touch and hold the medal. It was meaningful to her to witness the fan’s reaction as she received the award for the first time.

Not only was it her first Olympic medal, but it was also theirs. J. Oliver also addressed the issue of mental health in professional sports, which has been front and centre since Simone Biles’s retirement from competition this year.

She recalled arriving at the venue excited to compete in her first Olympic Games, but also being struck by the eerie silence that pervaded the 68,000-person capacity setting.