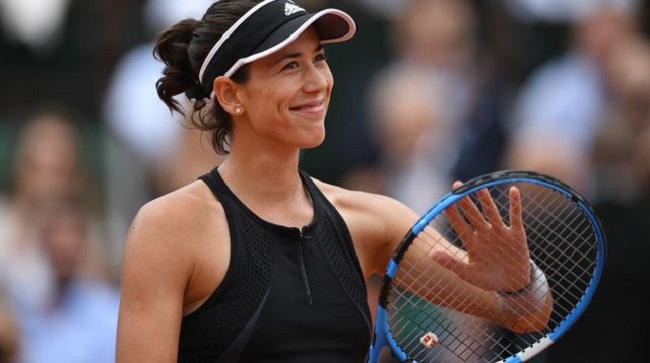 She reached an all-time high of No. 1 in the Women’s Tennis Association (WTA) singles rankings and No. 10 in the WTA doubles rankings.

So far, she has won 10 singles tournaments, including the 2016 French Open, the 2017 Wimbledon Championships, and the 2021 WTA Finals.

Muguruza rose to fame with her strong groundstrokes and aggressive play after she advanced to the fourth round of the 2014 Australian Open, where she beat former world No. 1 Caroline Wozniacki.

She reached the quarterfinals of the French Open that year after advancing over Serena Williams, the world’s No. 1 at the time.

Carlos Suarez Navarro and Sara Sorribes Tormo were two others on the Spanish team. Muguruza and her teammates are shown in the video.

Engaging in various forms of mischief, including dancing, filming the Olympic grounds, showing off their hotel rooms, and more.

The First Medal for Muguruza Is Still in Sight

Muguruza has just finished her second Olympic competition but has yet to win a medal.

This time, she made it to the quarterfinals before losing in straight sets against Elena Rybakina.

The 27-year-old and Suarez Navarro were eliminated in the second round after losing a close match tiebreak, 11-9, against the Swiss duo of Belinda Bencic and Viktorija Golubic.

Muguruza stated that she hopes to win all four Grand Slam tournaments, and that it would be an honour to share the court with fellow Spaniard Rafael Nadal at the Olympics.

The 20-time Grand Slam champion had planned to play with Muguruza in the mixed doubles in the Brazilian city, but they had to withdraw due to exhaustion.

However, Muguruza, who won the 2016 French Open and the 2017 Wimbledon Championships, is hoping to recruit the 34-year-services old’s in Tokyo this coming summer.

Muguruza, currently ranked 15 in the world, told the Spanish newspaper AS that she hopes to partner up with Nadal at the Tokyo 2020 Olympics in order to win her first Olympic medal.