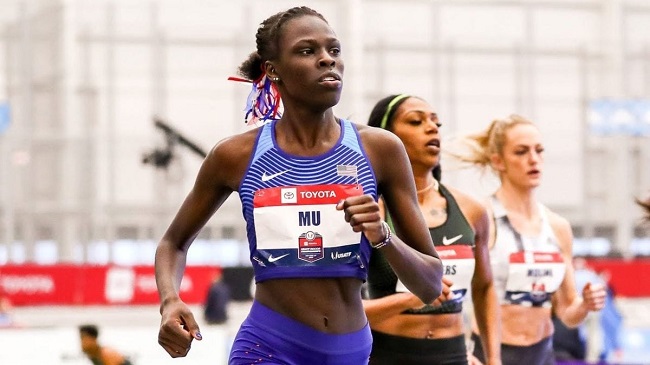 Athing Mu, who was born on June 8, 2002, is a middle-distance runner for the United States. She broke the record for youngest woman to win Olympic and world titles in an individual track & field event.

Mu, then only 19, broke both the national record for the 800 metres (established by Ajeé Wilson in 2017) and the continental under-20 record (made by Mu herself) to win gold in the 2020 Olympics in Tokyo.

As a member of the women’s 4 x 400 metre relay team, she won a second gold medal. She became the first American woman to win a world championship in the 800 metres when she won the 2022 title.

With two Olympic gold medals under her belt at such a young age (19), it would be easy to assume that Athing Mu of the United States would be content to rest on her laurels.

The Olympic 800 metre winner is only now beginning to tap into her extraordinary potential, but she has already established some extremely ambitious goals for her athletic career.

Which she later broke at the Prefontaine Classic held after the Olympics. Everyone was taken aback by Manning’s unexpected victory.

It was the first time a woman of colour had ever won the 800 metres in the Olympics, and it paved the way for more persons of colour to pursue their dreams of becoming elite distance runners.

Athing Mu, an Olympic rookie, ran away with the women’s 800 metres on Tuesday to earn gold for the United States.

By finishing in a national record time of 1:55:21, Mu cemented her place in history as the first American woman to win the race since the 1968 Mexico City Games.