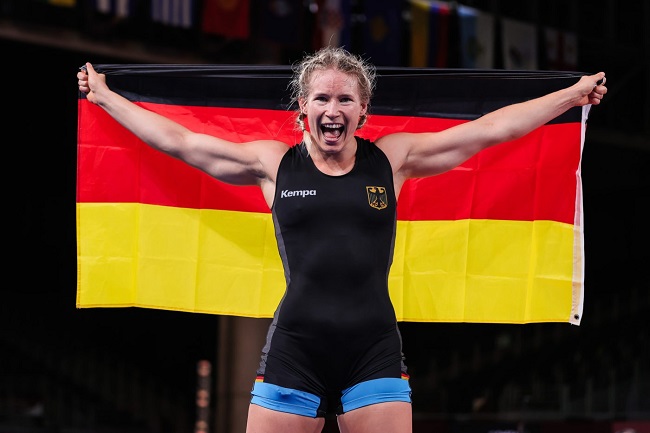 In 2014, she triumphed at the 69-kilogram global championships, and in 2013, she took bronze at the 67-kilogram European Championships.

She triumphed in the 2020 Summer Olympics held in Tokyo, and she took home the gold. In 1996, she got her start in the sport with the help of her father, Hans-Georg Focken.

At the 2020 Individual Wrestling World Cup in Belgrade, Serbia, she competed in the women’s 76 kg weight class and came out on top, winning the gold medal.

At the 2021 Poland Open in Warsaw, Poland, she triumphed and took home the gold medal. She won the gold medal at the Tokyo Summer Olympics in 2020.

On August 2nd, on Mat A at the Makuhari Messe Hall, Germany’s Aline Rotter-Focken won gold by defeating Team USA’s Adeline Gray (silver) by a score of 7-3.

QIAN Zhou of the People’s Republic of China and Yasemin Adar of Turkey both took bronze in the same competition.

Rotter-Focken, the final’s No. 2 seed, got out to a fast start and quickly took a 7-0 lead. Even though she put up a good fight and made it a close match.

Gray couldn’t win the gold medal in women’s wrestling for the United States alongside Helen Maroulis.

Her loss in the 76-kilogram women’s freestyle wrestling final on Monday night to Germany’s Aline Rotter-Focken was by a score of 7-3. Gray has won five world titles, but none at the Olympics.

She battled ailments that forced her to miss the 2015 world championships and the 2016 Olympic Games, where she placed a disappointing seventh.

After suffering a setback, she went on to win two more world championships and secure the top Olympic seed.

She was sure she would win the gold medal in the Olympics and join Helen Maroulis as the only two American women to ever win in the sport of wrestling at the Olympic level.

Gray is confident that her legacy will live on despite this setback. For the United States, it was only the sixth medal in women’s wrestling.

Aline Rotter Focken, born in Germany on May 10, 1991, is a professional female wrestler. Originally from the German state of North Rhine-Westphalia, her hometown is Krefeld.

Aline is a Freestyle wrestling specialist and 76 kg German national champion. Hans-Georg Focken, Aline’s father and current wrestling coach, first introduced her to the sport when she was five years old.

She took her pursuit of the sport seriously and eventually won multiple junior championships in her weight class.

In 2013, Aline burst into the international stage when she won bronze at the European Wrestling Championships in the 67 kilogramme freestyle division.