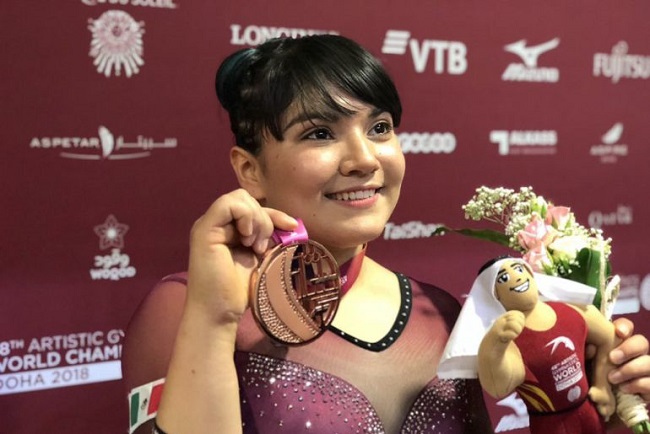 Former Mexican artistic gymnast Alexa Citlali Moreno Medina was born on August 8, 1994. As the first female gymnast from Mexico to win a medal at the World Artistic Gymnastics Championships.

She made history by taking bronze on vault in 2018. She competed for Mexico in the all-around final at the 2016 Summer Olympics, where she finished as the second alternate.

And the vault final at the 2020 Summer Olympics, where she finished fourth. The 2010 Central American and Caribbean Games awarded her the silver medal on vault.

And the 2010 Pacific Rim Championships awarded her the bronze medal on vault. Aside from that, she has won five medals in the FIG World Cup.

She has won team gold in the 2010 Central American and Caribbean Games and bronze at the 2014 and 2018 Pan American Championships.

According to the Mexican Gymnastics Federation, Alexa Moreno’s career may be over after she placed fourth in the women’s vault at the 2020 Olympic Games.

In an interview with ESPN, Federation president Gustavo Salazar discussed the bright future of Mexican gymnastics.

Moreno has stated that she needs time away from the pressure of competition before making a decision, and Salazar respects this.

Although she ultimately lost to Yeo Seo-Jeong of Korea in the final on Sunday, the Mexican gymnast came within a hair’s breadth of winning the bronze medal.

Alexa Moreno: From Being Bullied to Making History for Mexican Gymnastics

Although Alexa Moreno was the target of online harassment during the Rio 2016 Olympics, she is now being praised for her remarkable abilities.

Mexico will forever be in her debt for her bronze medal performance at the 2018 World Championships, and she has set her sights on another gold in the Tokyo 2020 Games in 2021.

Alexa Moreno can still picture herself walking through the curtain to the Olympic stage for the first time.

She stated about Rio 2016, “In that moment, everything feels different.” It was then that she realised the Games weren’t a joke.

After finishing in third place on vault at the 2018 World Championships in Doha, Alexa Moreno qualified for the final again in 2019.

Solidifying her place as one of the world’s best and ensuring her participation in the Tokyo 2020 Olympics.

For her, as an open admirer of Asian traditions, participating in these Olympics would be a lifelong dream come true.