Aidan took home silver at the welterweight division of the 2018 Commonwealth Games. Together with his sister Michaela Walsh, another world-class amateur boxer. 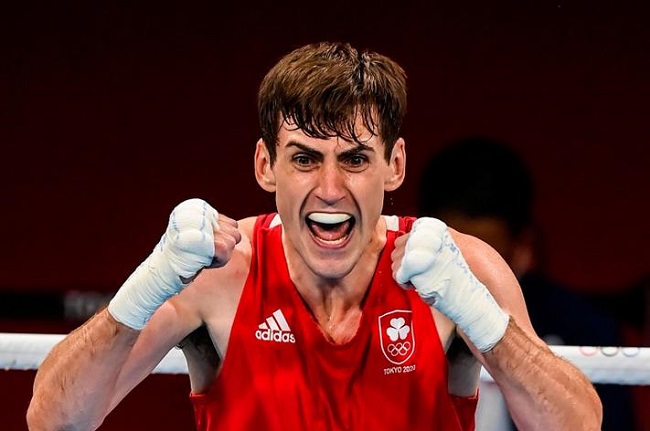 Aidan competed in and won gold at the 2022 Commonwealth Games in Birmingham. Walsh earned bronze in the men’s welterweight event at the Tokyo 2020 Olympics.

After beating Merven Clair of Mauritius in the quarterfinals of the men’s welterweight division on Sunday, Irish boxer Aidan Walsh was forced to withdraw from the Olympics due to a rare injury.

During his exuberant celebrations, Walsh twisted his ankle and was unable to make it to the medical check and weigh-in before his semifinal match against British boxer Pat McCormack.

McCormack, a favourite to win the gold medal, will now advance to the finals by virtue of a walkover.

Walsh, from from Belfast, will still take home a bronze medal. Despite advancing to the medal rounds with a win over Merven Clair.

Of Mauritius by a score of 4:1 on Friday, his exuberant celebration after the victory may have cost him the gold.

Tokyo 2020: Aidan Walsh forced to Withdraw From Semi-Final Due to Injury

Irish boxer Aidan Walsh had to settle for bronze at the Tokyo Olympics after an injury prevented him from competing in his semi-final match against British opponent Pat McCormack in the welterweight division.

After beating Merven Clair of Mauritius in the quarterfinals on Friday, the Belfast boxer was injured in the celebration that followed.

Walsh had hoped to recover in time for Sunday’s match, but the Olympic Federation of Ireland released a statement late Saturday night Irish time confirming the decision to withdraw due to medical issues.

Walsh jumped around frantically after hearing the decision and twisted his ankle as he landed.

The Irish team reported that Walsh sprained his ankle, and later on Friday, he was seen being wheeled out of the Kokugikan Arena by Irish journalists.

The Irish team has confirmed that Walsh will not be competing in the Olympics owing to an ankle ailment.

Up until he woke up in pain from all the celebrating following his victory, Walsh looked and moved like a man in peak physical condition throughout the whole battle.