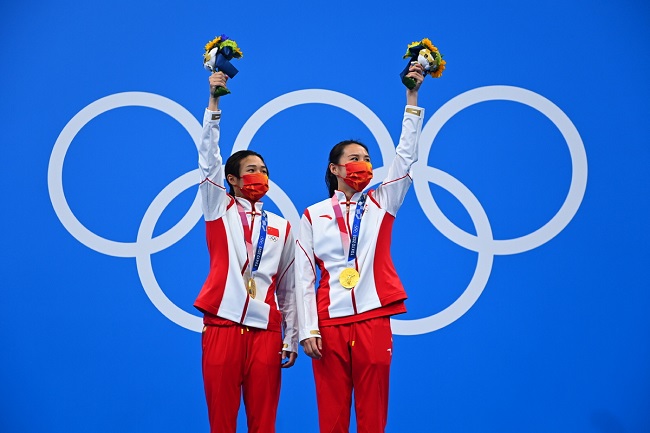 In 2021, the Tokyo Aquatics Centre hosted the men’s 3m springboard diving competition at the 2020 Summer Olympics in Tokyo.

The event has made an appearance at every Summer Olympics since the 1908 Summer Games, making this the 26th time it has taken place.

One dive from each of the five categories must be included in each set of six dives (forward, back, reverse, inward, and twisting).

You can choose the sixth dive from any category, but it can’t be a repeat from the previous dives.

Difficulty levels for dives are determined by factors such as somersaults, position, twists, approach, and entry.

Chinese diver Shi Tingmao won her second gold medal of the Tokyo Olympics on Sunday, this time in the women’s 3-meter springboard competition.

Four out of the first five diving competitions were won by Chinese competitors. They were silver medalists in the men’s 10m platform synchro event.

Shi successfully defended both of her titles from Rio de Janeiro five years ago.

This time on the 3-meter platform as an individual, in addition to the springboard synchro gold she earlier won with Wang Han.

On her final dive, a forward 2 1/2 somersaults with one twist pike, Shi scored a perfect 78.00 points.

With hardly a ripple, she slashed her way through the water. When Shi got out of the water, she wiped her tears with her yellow chamois.

On Wednesday, Wang Zongyuan and Xie Siyi won the men’s 3 metre synchronised springboard event to give China its third diving gold medal of the Tokyo Olympics.

They had previously lost the title to Great Britain in Rio.

The Chinese team got off to a fast start, ultimately finishing with 467.82 points, well ahead of the second-place American duo of Andrew Capobianco and Michael Hixon.

“For the past nine years, I’ve prepared myself for this day. I couldn’t have been more pleased with our impeccable timing.

Athletes are free to attempt dives of any degree of difficulty; the FINA rulebook’s highest-scoring dives.